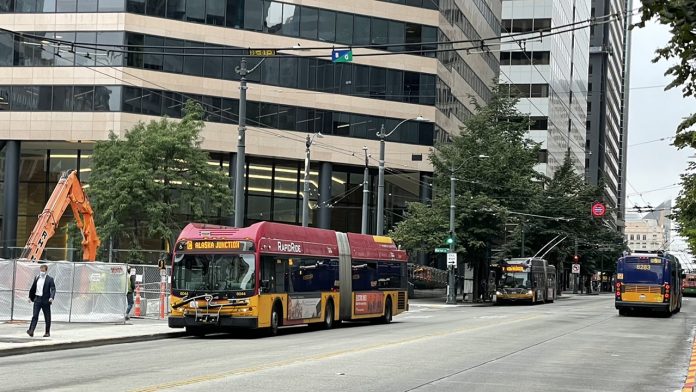 King County Metro is continuing to boost bus service via three rounds of service restorations. Changes coming in October and March will bring the agency back very close to pre-pandemic levels. A final round of service restorations is expected in September 2022. Metro also appears poised to stave off — or at least continue to forestall — a fiscal cliff that would otherwise require deep service cuts in the years ahead and could begin to focus on more targeted investments in the bus system.

Despite a pessimistic outlook last fall when Metro thought additional service cuts would be required, the financial picture has vastly improved with federal assistance coming through and tax revenues rebounding.

The agency was able to make significant service restorations in March of this year and made targeted service additions on routes where demand remained high during the pandemic. Those targeted service additions were meant to deal with crowding — due in part to lower capacity limits — on routes serving racially diverse and lower-income communities in Seattle and South King County; those service additions will remain in place going forward. Metro has also been able to make modest restorations to some Eastside bus routes — which was accomplished in June — and restored all transit vehicles to full passenger capacity on July 3rd.

Right now, Metro has 19 routes that are fully suspended and 49 routes that are operating with partially reduced service. The agency has committed to restoring at least some service on 32 of those routes in the fall with more to come in subsequent service change rounds in 2022.

In the fall, Metro will implement a service change on October 2nd timed to coincide with the start of the Northgate Link light rail extension. That service change will restore service to 90% of pre-pandemic levels with about an additional 200,000 annual service hours. Metro will also implement a bus restructure centered around light rail.

Metro has also indicated that Route 628 will fall off the suspension list and instead officially be deleted in October. It’s the only non-Northgate bus restructure route headed for deletion and previously ran from North Bend to the Issaquah Highlands.

In deciding how to restore, Metro has looked at equity considerations, ridership trends, and surveys and consultations with employers and institutions. As should be evident, the restored service coming in the fall is heavily focused on routes that operate during weekday peak hours.

During a meeting on Wednesday, Bill Bryant, Managing Director of Metro Service Development, explained the rationale for the peak-hour service restorations planned. “We expect the typical employee who has been able to telecommute to work during the pandemic will, on average, likely continue to telework between two and three days a week — maybe an average of 2.5 days,” he said. Though these workers only represent a small share of the workforce and commuters, Bryant said that they will necessarily affect demand for peak-hour service since they traditionally “cause the sharp peak-hour congestion and heavy transit loads” seen across the transportation network. Bryant added, “We have been able to estimate that our plan to restore about half of the number of trips on each of the peak-only routes that’s getting restored on October 4th should meet the initial needs.”

As for the Northgate bus restructure, it will create seven new routes, delete 14 routes, and revise a further 10 routes. The restructure largely affects North Seattle, Shoreline, Lake Forest Park, Kenmore, and Bothell, however, some of the changes to peak-hour routes also affect Downtown Seattle, First Hill, and South Lake Union.

One factor working against what Metro might otherwise be able to do is the Seattle Transportation Benefit District (STBD). “The newly downsized STBD — that’s the City of Seattle investment — which is about half that size of its former self is forced by their reduced budget to permanently delete a lot of the frequency increases that they’ve been funding since 2014 or 2015,” Bryant said. “For example, many routes are going to be reduced in October from 15-minute frequencies to 20- or 30-minute frequencies, especially on nights, weekends, and holidays.” Reductions of the STBD are due to the mayor and city council opting for a smaller reauthorization measure that voters widely approved in November.

However, Metro has said that the “STBD will be funding approximately 25,000 annual service hours in the North Link project area on Routes 20 (new), 40, 44, 48, 70, 49, 65, and 67.” It will also fund investments on Routes 7, 50, 60, 120 as well as the RapidRide C Line, which are partially covered by cuts from more than a dozen routes and investments in extra service when reduced schedules would otherwise apply to routes.

Changes coming in March and September 2022

On Wednesday, Bryant had some new information about what is possible in March 2022. “We are targeting about 75% of trips to be operating on all peak-only routes,” he said. “We will bringing back at least some service on every suspended route in March of 2022.” Staffing levels and available equipment should be adequate to deploy the restored service planned, which is expected to be 94% of pre-pandemic levels.

Bryant also mentioned that the agency has become nimble at adding back service in between service changes and may do so in between the service changes slated for 2022. He said that if overcrowding becomes a problem, more service may be deployed to address that, especially on commuter routes.

Then in September 2022, Bryant said that service levels should reach 100% of pre-pandemic levels. The exact service allocations will be “fine-tuned based on observed ridership and travel patterns, and community feedback,” Jeff Switzer, a Metro spokesperson, told The Urbanist.

With a wider view into 2023 and beyond, Metro may be able to do more. General Manager Terry White previewed a more optimistic outlook on Wednesday. “We’ve actually heard Budget Director [Dwight] Dively describe this financial [situation] ‘as if the Covid pandemic never happened’,” he said. “To this end, Metro will be proposing to focus this additional revenue to cover continuing expenses for Covid response and recovery. We’ll propose pushing back and reducing the ‘2025’ 500,000-hour service ‘cliff’ that was assumed in our adopted budget and we will also propose further investment in electrification as well as advancing initiatives that also help to achieve our Metro Connects vision.” However, White cautioned that Metro was still strained for additional growth prior to the pandemic and would still need additional financial resources to do so afterward.

Nevertheless, this positive situation is possible due to federal assistance and higher tax revenue collections and forecasts. Metro has benefited from $245 million in relief funding through the federal Coronavirus Aid, Relief, and Economic Security (CARES) Act of 2020. This plugged the budgetary hole from collapsing revenues for operations and helped with emergency pandemic response expenditures, such as cleaning and safety equipment. Metro is also getting $258 million from the federal Coronavirus Response and Relief Supplemental Appropriations Act (CRRSAA) of 2021 and will get additional funding from the federal American Rescue Plan (ARP) Act of 2021 — though exact funding allocations are yet to be determined by the Puget Sound Regional Council.

More details on the future of Metro will come in the next several months as the agency moves ahead with developing a supplemental budget.