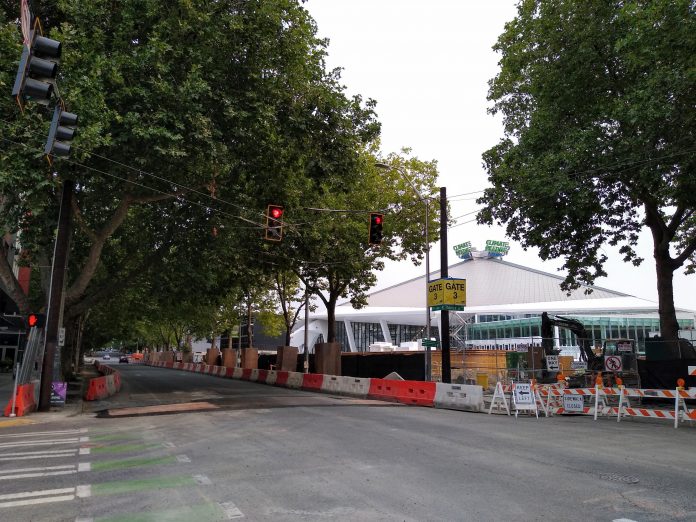 With less than three months until the opening of Climate Pledge Arena, almost entirely rebuilt compared to its former iteration as Key Arena, you might actually notice more activity on the streets surrounding the arena than you would by attempting to peek through the construction barricades at the site. A laundry list of transportation improvements intended to prioritize certain modes and mitigate traffic arriving in the neighborhood for events are all coming together in advance of the first events, to be held close to the first Seattle Kraken home hockey game versus the Vancouver Canucks on October 23rd.

Nearly all improvements were agreed to as a condition of the new arena receiving its Master Use Permit (MUP), and were prioritized via the Seattle Department of Transportation’s outreach process around north downtown mobility. That process led to the 2019 NODO [North Downtown] Mobility Action Plan, which will also be used to determine other transportation improvements that might be needed in the surrounding neighborhoods after the arena is open.

The Kraken generated headlines last year when they announced that all home hockey game attendees would receive a free regional transit pass with their tickets. Perhaps even more so than the cost benefit to hockey fans is the ease with which the transit pass will be available, embedded in the digital ticket. Attendees are also encouraged to purchase their parking at any of the arena’s three garages at the time they buy a ticket — with people who might have opted for street parking being dissuaded by special on-street parking rates intended to push people into garages. Basically, people are being pushed to think about their mode of transportation up front when they plan their trip.

Of course, for transit to be competitive, it has to work well. Big events at Seattle Center’s arena have always had significant impacts on buses traveling through the corridor, impacting riders heading to Queen Anne, Ballard, Magnolia, and beyond. But Climate Pledge Arena will open with new transit lanes for northbound buses along 1st Ave N and for southbound buses along Queen Anne Ave N.

The transit-only lanes won’t extend the entirety of each street, with buses needing to merge a block before either Mercer Street or Denny Way respectively in order to make turns onto those streets. The transit-only lane on 1st Ave N will also come with a queue jump that will give buses a head start at Republican Street.

According to the Seattle Department of Transportation (SDOT), these transit lanes, combined with other strategies that are being implemented to manage transportation at the arena, will nearly cut in half the travel time on transit for southbound buses using Queen Anne Ave N, going from 11.8 minutes to 6.3 minutes in post-event traffic between Mercer Street and Denny Way. Travel time for northbound buses will improve by one minute, from 6.8 minutes to 5.8 minutes under the same conditions between Denny Way and Mercer Street.

A big part of ensuring success for these transit lanes will be making sure they remain clear for buses. 1st Ave N in particular will be an obvious spot for Uber and Lyft drivers to queue around events, but geofencing is planned to restrict where on-call drivers can pick up and drop off riders, away from transit priority corridors. It remains to be seen how this will actually work in practice.

Also taking shape right now is a direct northbound connection between the 3rd Avenue bus corridor and Denny Way. Buses heading to Uptown or Magnolia have always had to take a turn from 3rd Avenue onto Broad Street and then onto 1st Avenue to keep going north, but the added transit lane and new traffic signal will allow buses to turn directly from 3rd Avenue onto Denny Way, saving Metro dozens of hours per year and saving riders’ time.

As for Denny Way itself, prioritization won’t be as clear cut for riders of the Route 8 heading to Capitol Hill from Uptown. SDOT is investing around $10 million in supercharging traffic signals along the corridor, making them adaptive like the ones currently in place along Mercer Street. While those improvements might come at the expense of people walking as far away as Stewart Street, there may be small gains for the Route 8. After events, drivers exiting from many garages in the vicinity will be directed to corridors that aren’t Denny Way, for example turning left from 5th Ave N onto Denny will be prohibited in an attempt to keep Denny Way from becoming a parking lot. Still, SDOT’s data only suggests that traffic speeds on Denny between Taylor and Stewart will only go from 2 mph to 2.7 mph with these mitigation strategies.

Work is currently underway to extend the 2nd Avenue protected bike lane into Uptown. The current northern terminus of that bike lane at Denny Way will be adjusted, routing people on bikes onto the sidewalk area so that two southbound lanes of 2nd Avenue can cross Denny Way at a time. Instead, the extension of the two-way protected bike lane will be installed along Broad Street and 1st Avenue.

At Denny Way, a new pedestrian and bicycle crossing will be added along the west side of the intersection, where a signalized crossing currently doesn’t exist and signs prohibit crossing now. From there the bike lane will run along 1st Ave N’s west side for two blocks to Thomas Street, kitty-corner from the arena, but on Thomas Street it takes a jog over one block to Queen Anne Ave N.

No bike facilities will connect the block between Mercer and Roy Street in Uptown’s north end, even though Roy Street is one of the only streets heading east-west outside of Seattle Center that has bike lanes.

Big upgrades are also taking shape to the connection to the Elliott Bay Trail via the John Coney bridge at Harrison Street and 3rd Ave W. Once complete, the street will have a two-way protected bike lane for the half block between the bridge and Harrison Street. New sidewalks have replaced the damaged old ones for people who don’t feel comfortable in a bike lane.

East-west improvements in Uptown are already in place along Harrison Street connecting to the Queen Anne Ave N protected bike lanes, but just in the uphill direction. Downhill the traffic lane has been narrowed, with no parking along that side of the street, with new all-way stop signs hopefully reducing vehicle speeds along the corridor.

On the east side of Seattle Center, people riding bikes from Dexter Ave N or 9th Ave N might not have noticed new protected bike lanes that went in last year along Thomas Street around the time that the Washington State Department of Transportation was wrapping up work on the massive-for-a-city-street 7th Ave N. Some gaps remain along Thomas, as the corridor was slated to get further upgrades as part of the “Thomas Street Redefined” project. That project actually involved a planned closure of Thomas Street to vehicle traffic immediately east of Seattle Center at 5th Ave N in early 2020 but that never happened, with a new timeline unclear.

Among other upgrades, Thomas Street Redefined includes the installation of Seattle’s first protected intersection at Dexter Ave N, a design implemented in many other cities in which all directions of bike and pedestrian traffic are protected from turning vehicles by physical barriers through most of the intersection. The plans for that are currently at the 30% design level and are shown below.

The expectation of Seattle’s transportation planners is that on the day of the arena’s opening 63% of the attendees will arrive by their own private vehicle, with another 15% arriving by ridehail. Transit is only expected to be used by 8% of attendees arriving and 6% of attendees departing events, a number that SDOT hopes to close to double as soon as possible and more than triple by 2035. Bike mode share is expected at a mere 1% with a stretch goal of…2%.

Of course, the improvements to the streetscape help all Seattleites trying to navigate Uptown or who need to get through the neighborhood on the way to somewhere else. In this way, the arena’s impact should reverberate in some positive ways, no matter how you may feel about the facility itself or its reflection on Amazon’s Climate Pledge.