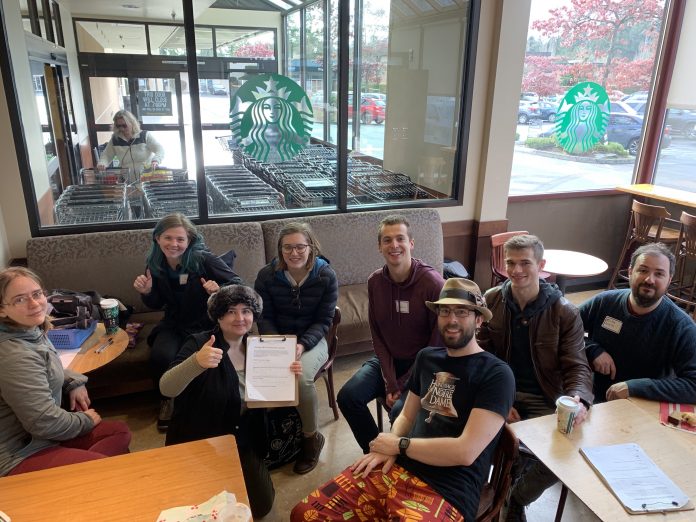 Volunteers are canvassing the neighborhood to learn more about the community’s hopes for what light rail will bring to this forgotten corner of Seattle.

Today Jackson Park is a North Seattle bedroom community tucked beside I-5 between Bitter Lake and Lake City. It’s best known for its public golf course, a 160-acre site owned by the City of Seattle and operated by a private company. However, in only a few years Jackson Park will become a transit hub. In 2024, a light rail station and bus rapid ride line are slated to open at NE 145th St, on the border of Shoreline.

It is also possible that another light rail station will also open at NE 130th St in 2024. Sound Transit is currently studying the feasibility of completing both light rail stations at the same time and should make a decision by the end of 2019. The NE 130th St station is currently targeted to open in 2031, and opening it in 2024 would be a big win for transit advocates.

Either way, it is indisputable that Jackson Park will be experiencing major changes in the foreseeable future. In preparation, the City of Shoreline has completed a Station Subarea Plan for the NE 145th St station, which will straddle the border between Shoreline and Seattle.

Shoreline’s plan has been heralded by transit and housing advocates as decidedly YIMBY (or pro-housing). Doug Trumm reported for The Urbanist in 2016 that the NE 145th St Station Subarea Plan converts the zoning of the surrounding area from single-family residential to Mixed Use Residential (MUR) with maximum height limits ranging from 35 feet to 70 feet. The result is an impressive 70 blocks of urban zoning which will be followed by an additional 35 blocks of urban zoning that will come into effect in 2033 at the same time another light rail station opens at NE 185th St.

Shoreline spent three years engaged in public outreach in creating its Subarea Plan. However, the City of Seattle has yet to engage in much formal outreach to the Jackson Park community. Why?

One major reason is the presence of the Jackson Park golf course–as well as another major land owner on the opposite side of I-5, Lakeside School. Over 200 acres of land is held by these two institutions alone.

Seattle’s Office of Planning and Community Development (OPCD) has planned to begin outreach to the Jackson Park community in 2019. However, in the meantime the organizing collective Share The Cities has embarked on canvassing in the neighborhood. Instead of approaching the community with proposals or outsider solutions, Share The Cities has focused on asking questions.

Share The Cities hopes that this approach will result in community driven, equitable development.

“We do not want to come into a community and say ‘we are urbanists and we know what is best for you’. This leads to a lot of confusion, anger, mistrust and could inspire a backlash of protectionism,” said Laura Loe, founder of Share The Cities and a former contributor to The Urbanist.

“This is Alaska–or at least an Alaskan city,” joked Loe at a recent canvassing event after volunteers spoke of missing sidewalks and a general sense of wandering through a forgotten corner of Seattle, where being a pedestrian or cyclist can feel rebellious, or dangerous, depending on your mood.

Joking aside, Jackson Park really is one of Seattle’s forgotten corners. It is a neighborhood without a strong identity. Some residents consider themselves part of Lake City, while others claim Pinehurst or even Haller Lake. This is in part because while Jackson Park does contain a shopping center with a QFC and some of other small businesses, it does not have a defined center or neighborhood building establishments, like coffee shops or pubs.

The community also lacks a public park. While there is a community trail that runs around the golf course, many residents decline to use it because of safety concerns. In addition to homeless encampments that have deposited waste on the trail, housed residents also complain about the trail’s poor drainage and the portion of the trail which forces walkers onto the sidewalk alongside busy NE 145th St for several blocks.

The desire for the future light rail station to be accompanied by the development of community sites such as a park, library, fitness center, or private businesses like cafes, comes up frequently in canvassing conversations.

“I would like the future light station to be a destination–a place where the community can hang out. We don’t have anywhere where we can gather together as neighbors and I’d like to change that,” a Jackson Park resident said at a recent Share The Cities canvassing event.

There is definitely an equity conversation that should be held on this point. Jackson Park is a mixed-income community that includes a significant number of people of color and different cultural and linguistic minority groups. A mix of housing types, including large apartment developments, condominiums, and single-family homes, also differentiates Jackson Park from many North Seattle neighborhoods.

Many renters have been attracted to the neighborhood because of its affordability and access to the interstate and bus lines to downtown. The City will need to be mindful of possible displacement of low-income residents in its future development plans.

Decisions around the future of the Jackson Park golf course will need to be made in the near future. What will happen to the golf course is far from certain, although the size of the parcel and its proximity to future rapid transit have made it a site of interest for affordable housing advocates. That being said, Share The Cities is not advocating for any particular use for the site.

The Jackson Park site is notable for a few reasons, including its size. It actually consists of two courses, one “Championship” course that is 18 holes and another 9-hole “Executive” course, as well as a driving range. The course is sandwiched between the boundaries for the future NE 130th St and the NE 145th St light rail stations. In fact, a substantial amount of the northern end of the golf course will fall directly into a quarter-mile walkshed for the future NE 145th St. station.

Because of the golf course’s size, it is highly possible that some of it could be maintained for golf, while the rest is developed into affordable housing, retail, public open space, or even community agriculture. At this stage, the possibilities abound.

“Share The Cities’ volunteers have many different ideas for what they want for the golf course, but luckily it isn’t up to me!” said Loe.

If you are interested in learning more about Share The Cities’ work around equitable development and transit, check out their Facebook page and RSVP for the upcoming meeting on Sunday, January 13th. You can also listen to Share The Cities founder Laura Loe discuss “Transit and Housing – Peanut Butter and Jelly” on Episode 12 of the Rail ~ Volution.