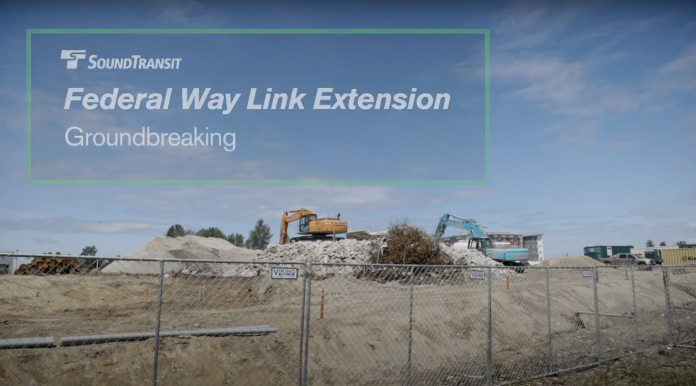 The Federal Way Link light rail extension has officially broke ground. Sound Transit announced the milestone on Thursday, though with much less fanfare due to Covid-19 pandemic. In lieu of the typical photo opportunity of politicians, shovels, and hard hats, Sound Transit released a video of local and national politicians praising the project along with local residents.

The light rail extension is due by December 2024, but an earlier start date is possible. An agency progress report from May indicates that there is still a project float of 257 days. The recent pandemic developments may have cut back some of that, but as construction gets underway, it should be much clearer if the project will remain ahead of schedule or begin to slip and eat up some or all of that project float.

The project will deliver three new stations on a 7.8-mile corridor serving about 34,000 daily riders. The extension begins at the terminus of Angle Lake Station in SeaTac and will run as far as Federal Way Transit Center near the city center. New stops will include Kent/Des Moines near Highline College, South 272nd Street (Redondo/Star Lake), and Federal Way Transit Center, though these are still working names.

The history of the extension is somewhat muddled. Sound Transit 2 pledged an southward extension to Redondo/Star Lake instead of Federal Way. The project, however, was trimmed back to Kent/Des Moines due to financial constraints from the 2008 recession. Construction did not follow due to the early planning process continuing until 2015, which eventually determined the alignment to Federal Way. Sound Transit 3 was then approved in 2016 and provided funding to complete the full extension.

This is not the first time delays have mired extensions in South King County. Angle Lake Station was supposed to open as part of the original Sound Move plan, but did not end up opening until 2016–nearly seven years after initial opening of the Central Link line. That was only a 1.6-mile extension.

Delays stem in part from the South King subarea has a constrained tax base and therefore tax collection. Early investments involved some quite expensive expenditures for commuter rail and express bus facilities and assets.

The alignment of the extension is somewhat circuitous and will increase travel times over simply using the SR-99 corridor as the basis of the extension. It also places both stations in Kent close to the interstate, greatly reducing walkability and ridership potential. Local governments fought against logical routings for parochial reasons. Still, the stations will offer opportunities to grow transit-oriented communities around them. Kent could greatly improve station access to the Kent/Des Moines station by coordinating and funding a bike and pedestrian crossing over or under I-5 to Military Rd S and developing a corresponding mixed-use district plan for the eastern side of I-5 to improve ridership from the station.

As a sideshow to the related Tacoma Dome Link Extension project, there has been debate over where to the Operations and Maintenance Facility South location. One of the shortlisted locations would be near the Kent/Des Moines station, a few blocks to the south on the old Midway Landfill site. Community members and regional burger-lovers fought against a potential location near the Dick’s Drive In, though that site would have consumed limited land that could facilitate transit-oriented development.

The total Federal Way extension project is anticipated to cost $3.1 billion. Sound Transit received $790 million grant in December from the Federal Transit Administration. Another $629.5 million comes from a loan backed by the United States Department of Transportation.