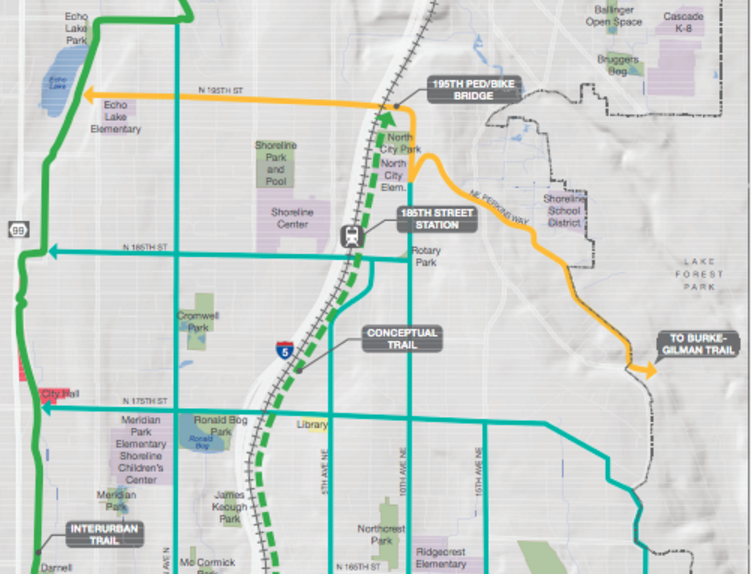 A new rail-trail in Shoreline? It could be on the horizon. A community-driven planning process to evaluate development of a new trail in Shoreline will kick-off on Wednesday (March 15th). Shoreline planners are proposing a new trail–what they’re calling “Trail Along The Rail”–parallel to the light rail line being constructed as part of the Lynnwood Link extension project. Shoreline is slated to get two stations as part of the extension, one at 145th Street and one at 187th Street next to I-5. The Shoreline trail concept would involve locating a bicycle and pedestrian pathway between these two stations.

As a multi-use path, the rail-trail could prove to be a great connector to key amenities like open space and parks, schools and libraries, and two planned urban villages around the light rail stations. Naturally, it could serve as great recreation option for jogging, strolling, and casual biking, but it also could become a practical means of commuting to work and getting between neighborhoods on foot. It could also fit in well with other planned bike and pedestrian facilities slated for implementation in the coming years.

Shoreline has drafted up possible cross-sections based upon design of the adjacent light rail line, which will be elevated in some locations and trenched in others. The cross-sections indicate a preference toward a 14-foot wide multi-use trail where possible, but there may be some locations that make that infeasible. In cases where that standard isn’t possible, the trail may need to be located toward local streets and require a modified design standard.

How The Trail Fits With Other Bike And Pedestrian Plans

Part of the east-west network is already in place. Bike lanes connect up the Interurban Trail and 10th Ave NE via N/NE 155th St and N/NE 185th St. But it’s the mile-and-a-half gap in between that makes east-west bicycling a challenge. Shoreline’s long-term bike plan implementation will solve part of this, which is being rapidly phased in with significant improvements slated for this year.

Going forward, Shoreline will begin to implement pieces of the 145th Street Multimodal Corridor Study plan, which places a strong emphasis on improvements for bikes and pedestrians. Projects in the plan include things like:

Taken together, these pedestrian and bicycle plans are setting Shoreline on a good track for increased mobility options and a transit-oriented future. How the rail-trail might fit into all of this will be determined over the next few months.

Shoreline – Light Rail Trail Concept by The Urbanist on Scribd

Shoreline Rezones 185th Street, But Holds Off On 145th Street