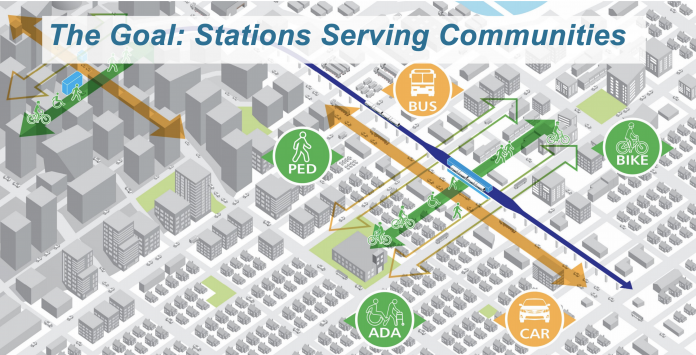 Sound Transit is making good on a policy directive to expand bathroom access to facilities and equitable transit-oriented development (TOD) commitments in Seattle. The agency is also making strides to take an even bigger stake in equitable TOD as the transit system grows. In briefings yesterday, agency staff shared details of the developments to board of directors members.

Sound Transit is planning to surplus 10 properties for equitable TOD in the Rainier Valley at no cost to the City of Seattle, pending full board approval later this month. Under the terms of ownership transfer, Seattle will be required to have the properties developed with 100% affordable housing for households at or below 80% of the area median income level. The housing units can be rented or sold, but the affordability requirement will have to run with the land for at least 50 years.

The terms also provide that the properties can be developed with ground floor community and nonprofit space as well as other non-residential uses where allowed by the local zoning laws. Sustainability requirements, however, will apply to redevelopment with projects having to meet the state Evergreen Sustainable Development Standard, the Gold level LEED Midrise or LEED Residential standards, or another equivalent or better green building standard.

The properties were acquired as part of light rail development in the Rainier Valley with sites near Mt. Baker, Columbia City, and Othello Stations. Properties range from 2,300 to 14,000 square feet, which can accommodate housing ranging from two homes to 40 homes depending on the lot size and lower density zoning of the properties. All told, this should net somewhere between 100 and 150 homes.

During the briefing, Seattle Mayor Jenny Durkan commended the move to transfer the surplus Rainier Valley properties to Seattle for equitable affordable housing development. “When I was growing up in Seattle, the Central District was about 70% to 75% African-American. Today it’s less than 14%, and we’re seeing that happen throughout the Rainier Valley as well,” she said. “This gives us an opportunity to take land and make sure that it stays in the hands of the public and is used for affordable housing, including affordable ownership opportunities so those communities can build wealth.”

More broadly, Sound Transit has a robust equitable TOD strategy and program. Agency staff showcased some of the key highlights with 2,100 homes in the pipeline with over 1,500 of those being affordable. The level of investment that those homes would deliver is over $1.1 billion. So far, 619 homes have started construction.

In 2020, Sound Transit was able to deliver 110 homes with the opening of a project at the Capitol Hill Station (Building B-North), all of which are long-term affordable. Two other projects broke ground in Roosevelt (Cedar Crossing) and First Hill (the latter of which is the first low-income Seattle highrise built in decades), which collectively will deliver 619 affordable homes in 2023. On top of that, Sound Transit began a process for developing a major mixed-used project at surplus property next to the operations and maintenance facility (OMF) in Bellevue and received board approval for development strategies on surplus property at Angle Lake Station.

This year, Sound Transit anticipates the opening of two partially long-term affordable housing projects in Seattle. The first of these is another 319 homes at Capitol Hill Station (Buildings A, B-South, and C) that is 21% affordable units. The second is at Beacon Hill where 139 homes will open with 20% of units being affordable. Sound Transit is also planning to break ground on 118 homes with the Capitol Hill Atlas project. That project is being developed by Community Roots Housing for long-term affordable housing centered around LGBTQ seniors and the eight-story mixed-use building should open in 2023.

Major equitable TOD advancements in project development will be a request for proposals at the Angle Lake TOD site and finalizing development terms with the developer of the OMF TOD site in Bellevue. Additionally, agency staff will work on various TOD projects in Federal Way, Kent, Redmond, Lynnwood, U District, and Mt. Baker.

Sound Transit’s growing equitable TOD portfolio and profile is in large part because of state statute under the 80-80-80 provisions. These provisions requires that as the agency surpluses land, at least 80% of suitable property for development must be first offered for affordable housing opportunities with at least 80% of units created being affordable to households with incomes at or below 80% of the area median income level.

During the briefing, King County Councilmember Claudia Balducci expressed satisfaction that equitable TOD has become a mission and focus of Sound Transit. “Some of us remember the days when the discussion was: ‘Housing? We build trains,'” she said. “We’ve really, I think, done a great thing as an agency and I wanna recall former King County Councilmember Larry Phillips who always envisioned and pushed the agency to use our position to advance the creation of transit-oriented communities and equitable development.”

On the planning front, agency planners began working on several broader planning efforts in 2020, including new design guidelines that focus on the station experience and a study that is intended to look into how retail can be integrated in transit facilities. The latter explores retail integration into both stations themselves and the station area more broadly. Agency planners also started a new study that will explore joint development strategies for parking facilities, which increasingly involve shared interest use of parking structures and mixed-use development at regional transit facilities. Other project planning work involved joint efforts in station planning and development assessments for the West Seattle, Ballard, and Tacoma Dome Link extensions and Stride bus rapid transit projects (e.g., assessment of equitable TOD at the Kenmore Park-and-Ride).

Looking ahead to this year, agency planners hope to wrap up work on the station experience design guidelines so that the agency is better prepared to evaluate and integrate retail into projects and begin early work on joint station planning for the Everett Link extension. Also building upon the work in 2020, agency planners intend to publish information on the joint station planning and development assessment efforts.

Agency staff are proposing a new bathroom facility policy to provide riders greater access to toilets and wash basins–features found widely in most rapid transit networks across the globally. Sound Transit has long been reticent to offer these facilities at stations and hubs because of the cost in operating them and risk for anti-social behavior to occur in them.

A policy from 1998 only narrowly required bathroom facilities at several regional hubs (i.e., Northgate Transit Center, Bellevue Transit Center, King Street Station/Union Station, Everett Station, and Tacoma Dome Station) and onboard Sounder trains. It further provided that additional facilities may be desired as funding and arrangements were put in place to manage them. That has led nine transit facilities featuring bathrooms with the addition Auburn Station, Sumner Station, Federal Way Transit Center, SeaTac/Airport Station, and Tukwila International Boulevard Station. As a caveat, Sound Transit no longer counts bathrooms at Angle Lake Station and Northgate Station (currently) as passenger bathroom locations, but had in 2019.

Local jurisdictions and passengers have routinely pushed the agency to include bathrooms in stations locating in their communities, which led to a policy rethink process in 2019.

By 2024, Sound Transit plans to have passenger bathrooms at 16 transit facilities. This will be delivered as part of the Lynnwood and Federal Way Link extension projects. New bathrooms will be located at the Kent-Des Moines Station and Star Lake Station as well as all of the Lynnwood Link station (Lynnwood Station, Mountlake Terrace Station, Shoreline/185th Street Station, and Shoreline/148th Street Station) and Northgate Station. The longer-term vision is to also have passenger bathroom at Issaquah and Seattle Center with the caveat that passenger bathrooms are transferred to local at Everett Station and Tacoma Dome Station.

A glaring gap in the transit map for passenger bathrooms is Seattle where only three locations are planned on the horizon. That is despite the fact that the Seattle stations and corridors are and will be the most heavily traveled part of the light rail system. The proposed policy would seem to be lacking serious equity considerations.

The agency says that the average cost per passenger restroom facility is $322,174 with security and customer service being the largest proportional operational expenditure at $188,291. The current system of passenger restrooms costs $2.9 million per year. With 14 locations by 2024, that cost is estimated to rise to $4.5 million per year. Adding the two new facilities at Issaquah and Seattle Center could further escalate this to $5.2 million per year. Designing and construction costs would also need to be factored into financing the new passenger bathrooms.

Agency staff said that the proposed policy is based upon practices that nine other peer transit agencies (e.g., Trimet in Portland, LA Metro ins Los Angeles, and WMATA in Washington, D.C.). Common themes among the agencies are having passenger-only access to bathrooms within fare-paid zones at major hubs. Bathrooms are also generally locked and require requested access to use them. Sound Transit hopes to emulate these practices. In 2019, these were themes that agency staff had generally highlighted to boardmembers as North American best practices–though this is not the case abroad.

Criteria that Sound Transit’s workgroup on the bathroom policy recommended is that new passenger bathrooms be located at hubs where at least five routes/services converge, there are at least 10,000 boardings per day, and that passengers have access to a bathroom within a 20-minute ride time from a transit facility. Agency staff are recommending that passenger restrooms be located only within fare-paid zones of facilities, use a typical design and operational approach, and employ a mix of security and rider presence to keep down anti-social behavior in restrooms. Though it is possible that with ORCA Nextgen that transit pass cards could be used to unlock bathroom doors if fare has been paid. Other media methods are being explored for access without such cards.

A final passenger bathroom policy proposal will move to the Executive Committee and full board soon.