I was walking through North Capitol Hill the other day, when I saw a City of Seattle “proposed land use action” sign, and affixed to it, a homemade sticker. The sticker proclaimed in bold block lettering, “STOP CONSTRUCTION. SAVE SEATTLE. BOYCOTT NEW BUILDINGS.” Beneath this heading were the following handwritten lines: “Keep money away from greedy developers, the construction industry, and our very corrupt elected officials. Overpopulation is killing this city, this state, this country, and this planet.”

A lot to unpack, no?

The printed block letters in all caps are a veritable call to arms, proclaiming that the new construction occurring in this city is ruining Seattle. As if Seattle was a fixed and proper thing, a static image, being overwritten with something unpalatable. So let’s start by simply recalling that cities are, by their nature, changing places. The choice in front of Seattle, and most growing places, is not whether to allow change but how to shape it.

I understand the appeal of the small-town version of Seattle; truly I do: the craftsmen all lined up under trees are absolutely adorable. We all see it! The truth about those craftsmen, though, is that they make zero sense in the context of big city budgets (they do not pay enough to keep the infrastructure serving them in good repair), and even less sense in the context of the housing crisis (more on this in a moment).

The handwritten lines under the block lettering belie quite a bit of emotion, and the line about the construction industry and developers deserves its own book; I want to focus on the last sentence, which equates construction (and, I infer, densification) with overpopulation. This is a fascinating misdirection, with the obvious first question of, what’s the link? Does the author think that densification causes or facilitates overpopulation? Or does the visible construction merely remind the author of the problem of overpopulation? Because–and this should be obvious–preventing people from living close to you is a really great strategy for pretending we don’t have an overpopulation problem on this planet; it doesn’t do a single thing to actually address overpopulation. So the insinuation that new construction somehow furthers environmental destruction via overpopulation is obviously specious.

I would posit that the missing link may be a fear of overcrowding. I read a lot of science fiction, and commonly come across the theme of overpopulation. Stories of this type are often set in an overcrowded city, sometime in the future. Perhaps these science fiction examples can elucidate the mindset of NIMBYs who fear change. 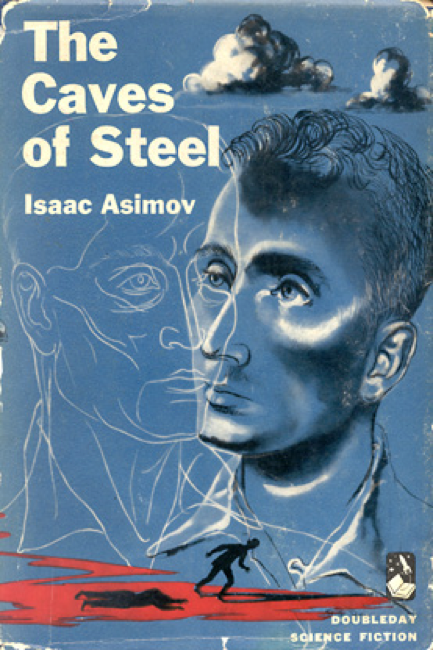 Isaac Asimov tackles population growth and how cities might equitably accommodate it in his robot-centric whodunit The Caves of Steel (1954). Technological advances have caused massive efficiency gains that enable humanity to live under enormous domes, while on the outskirts are “the hydroponic plants, the yeast-culture vats, the power plants… Practically none of Earth’s population lived outside the Cities. Outside was the wilderness, the open sky…” So humanity has roofed itself under “a self-contained cave of steel and concrete” while preserving the natural systems required to sustain human life far outside where those lives take place. Though Cities are crowded, the hubbub of pedestrian activity and the crowded public spaces are seen as positive, comforting, and familiar.

Ultimately, though, Asimov’s Cities are blamed with giving rise to a problematic culture. Humanity is “so enwombed in their imprisoning caves of steel” that they can’t even imagine leaving the City and crossing through open country. Though they’ve developed smart infrastructure and laudable civic-minded cultural norms, they are utterly divorced from nature. Asimov seems to be suggesting that by extension, they are divorced from their enterprising spirit and human curiosity. 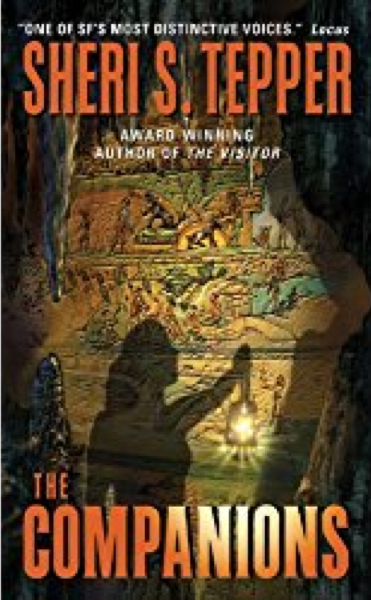 Prolific sci fi/fantasy author Sheri Tepper touches on this issue in many of her books, perhaps most clearly in The Companions (2003). This sprawling 500-page novel visits a number of planets, but begins on Earth where a thirteen square mile “urb” contains over a billion people. Each “urb” has a hundred towers, each two hundred stories tall and a mile-square, with roofs black with solar collectors. Towers are each broken into Tiers: ten floors with eight residential above one park floor and one mercantile floor. “Outside the city, the huge cables that brought power from earthcore-generators snaked away across the farmlands, on to another urb, tying everything together.” Again, people are basically enclosed in human-made environments. The people on Earth wear robes and veils for the anonymous civility they provide in such a crowded environment. Tepper’s Earth is a difficult place, and the beauty found on other planets in the book serves as a foil to highlight the despoiled Earth.

What Tepper and Asimov show us are not wholly good or bad; they highlight possible technological and built environment responses to accommodating so much population growth. These are visions of where unchecked population growth might lead, what taking densification to a logical extreme might look like–which is where the author of the sticker might think Seattle is headed.

If so, our sticker-wielding friend is relying on a classic slippery slope argument, and the exaggeration is obvious when you look at the numbers: the United States is the 185th most densely populated country in the world, and on the list of highest density cities in North America, Seattle is nowhere to be found. We Seattlites live in a low-density city in a low-density country.

So if Seattle is on a slippery slope, we’re still very much at the top of the hill–and there are people up here who need shelter.

That sticker was posted in a neighborhood zoned SF5000, “SF” standing, of course, for “single-family.” A whopping 57% of Seattle is zoned for single-family residential–the lowest density type of settlement in human history. So over half of our land, containing properties that could house dozens, is tied up in properties housing just a couple of people a piece. In other words, we have space to house people. And we have people who need to be housed. What preventing people from living close to you really accomplishes in this housing crisis is shifting the burden of living compactly onto those least equipped to manage it well–the poor.

And as for wringing one’s hands about the planet: the fact is, living densely is what we do to mitigate the environmental impacts of overpopulation: it’s called “growth management,” and it boils down to living compactly while preserving natural resources outside settled areas. Sprawl is the true land-use threat to the planet, as any environmentalist worth their weight in granola knows. Washington State, recognizing the threat of sprawl, has adopted growth management–which is why we have the incredible open areas and natural resources that make the Puget Sound such a special place to live. So anyone who truly cares about the planet embraces growth management and the density it implies.

We should take pride in building enough housing within our urban growth boundaries to shelter everyone who wants to join us in this beautiful city. So to the author of that sticker, I say the following: spare us the faux environmental concern. If you are worried about overpopulation, donate your time and money to family planning and educational endeavors. If you are worried about densification, take a look at the mountains from one of the many vantage points in this city–and if you’re glad you don’t see endless miles of soulless suburbs, thank your neighbors for agreeing to live so close to you. 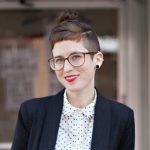 Hayley Bonsteel is a municipal long-range planner working in south King County. She has been an advocate for walkability, livability, and progressive planning in the Pacific Northwest for nearly seven years. Hayley is a daily Seattle pedestrian and transit rider, and serves on the Seattle Pedestrian Advisory Board. Thanks to a long Link+Sounder commute, she read 85 books last year.